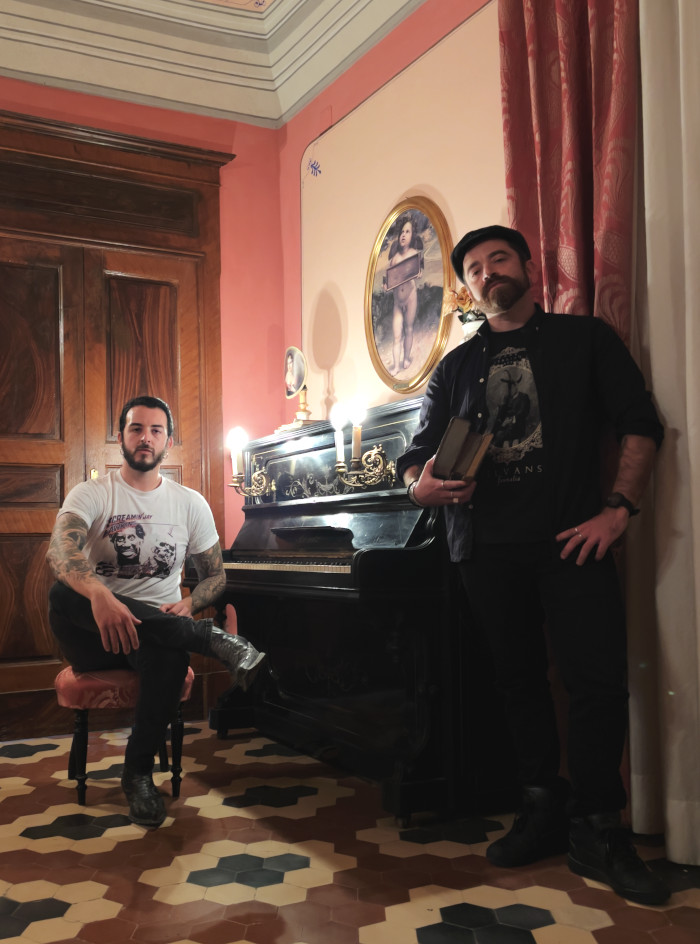 Ideas are like ghosts, they manifest on the staff and not only there…

When I started to work on the new EP, I felt an unstoppable whistle in my head, four modulated notes that announced the coming of something… Of Someone… The coming of Corvo Morto!
After writing the first notes it was clear that my contribution could have restricted to the capturing of sounds that sourrounded ‘Corvo’.
But in order to imprint Him in other forms, I needed to involve someone more capable than me.
Luigi Musolino was the name.
Born in Idrasca (Italy) but skilled world wanderer: from Salem to Innsmouth, from Derry to Twin Peaks…
Who better than an arald of the Italian folk horror to recreate all the Corvo-related acts and superstitions!?
Below you’ll find his known deeds… Haven’t seen him around in a while!
Is it perhaps that he joined Corvo Morto’s Black Carnival?
– Selvans

Luigi Musolino (Pinerolo, 1982) lives and works in Idrasca, in the province of Tourin.

He discovers fantasy novels at a young age in his father’s personal library
And in 2008 he stars collaborating with Pietro Guarriello’s Dagon Press.

In 2014 and 2015 they see the light “Oscure Regioni – volumes 1 and 2”, a two book anthology made of twenty tales that is a journey of discovery through italian folcloric creatures and legends

He has won twice the Rill Trophy,
An italian fantasy novel competition related to Lucca Comics.
In 2016 he won Hypnos Prize with the tale “Nere colline del supplizio”.

In 2018 the tale “Nelle Crepe” is published by Miskatonic Press/Vincent Books.
In the same year we have the anthology of horror tales about the metaphysical and
Dark corners of human nature, “Uironda” by Kipple Officina Libraria.

In 2019 he published his first novel “Eredità di Carne” by Acheron Books,
While in 2021 his tale “Pupille” is printed by Zona 42.
Soon another book in collaboration with the artist David Chance Fragale
will see the light.

n 2022 Valancourt Books will publish his first anthology in the United States.
His tales have already been published in Canada, USA, Ireland and South Africa.

Gigi and the King of the Carnival.